Over the years we had the pleasure of running our own club in different venues around Birmingham. Here's what we remember about them.

The Princes' Corner Folkish Club
Not the first, nor the only club that we had run but by far the most successful! Held at the Kings Arms pub in Harborne, Birmingham, the club opened on the 2nd September 1986 and lasted for around 6 years before we closed it in December 1992. The club was a great success for a number of reasons: a decent room and good management, a good acoustic sound, great guest artists and singers that turned up regularly for the singers' nights. However, the main reason for its success was the crowd that turned up week after week, sang along with the songs, joined in with the jokes and generally made it a lively place to be (especially the crowd from the back row!!).

We rotated guest nights with singers' nights (now apparently called "open mic nights") and we had the pleasure of listening to some of the biggest names on the folk circuit on our own turf. Many of the guests were friends of ours who we had performed with on other shows and in other clubs and who did us a favour by playing at our place for a greatly reduced fee!!

Strangely, even though we featured some of the best names on the circuit at the time, many of our regulars said that they preferred the singers' nights. While never knowing who might turn up to do a short spot, we had a regular collection of musicians and singers who would do their bit.

The main stars of our singers nights were, of course, Maggie and Therese who put us to shame by learning new songs regularly and were not above corrupting our own material! The fact that they were either good friends or related to most of the back row always helped their reception!! Bob Cain, (Geordie Bob) often sat down to play his blues for us - I remember one night when we formed "a band" and performed a rendition of CS&N's Wooden Ships!! It's on tape somewhere but I wouldn't t inflict it on you! There are far too many others who performed regularly to list (and the memory isn't what it was!) but thanks go to them all for contributing to some excellent evenings. Of course, if nobody turned up to sing then we just ploughed on all evening and thankfully nobody minded too much.

The Country Girl - Selly Oak
A short lived Wednesday night club that we part-ran back in the very early days in 1976 and 1977. Very few guests but gave us a chance to polish our act in front of a small but appreciative audience!

The Bulls Head - Kings Norton
Another venue in a picturesqe setting on Kings Norton Green that didn't last too long and ran during 1977. A Tuesday night club that again featured a guest artist every other week. The highlight of this club was when BBC Radio Birmingham decided to come to the club on 20th April 1978 to record a night for "Gentlefolk" featuring the show's host Norman Wheatley, Alan Bolt and of course Malfunction! The Bulls Head was the venue for our "comeback" gig in November 2017.

Other Residencies
We also turned up on regular occasions at a variety of small venues to be the resident artists. These included The Lord Raglan in Wolverhampton (an interesting venue with some great guests and no audience!), The Loony Bin in Solihull (percussion courtesy of the rugby players, tin trays and their heads) and the Mercatt Cross in the wholesale market in Birmingham which had more punters in at 5.00am than for the folk club!! We also had the pleasure of being regular residents at The Bell and Pump Folk Club in Edgbaston. See Other Clubs for memories of this fantastic venue. 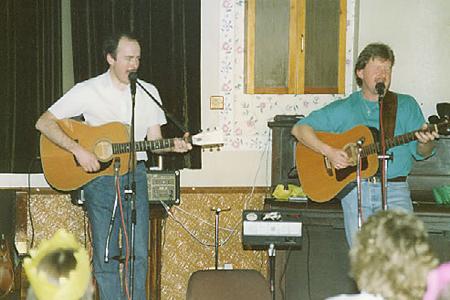