"Malfunction on the Pershore Folk Scene"
"Malfunction, the back-up group at the Pershore Folk Festival's evening on Tuesday must have chosen their name to be provocative. They are two engaging young men who entertained in a direct vigorous style and with a natural good humour that was not allowed to interfere with the line of the song. They explored the folk scene from the wry nostalgia of "He played for England", through Rural Wurzledom and Romantic Regret to a really exciting Railroad Blues - all strummed out with a variation of pace and mood, every word was remarkably clear and they were a pleasure to listen to. Perhaps their only malfunction was that they nearly stole the show from the guest stars."

"Malfunction make successful return visit"
"Its nice to be back said Malfunction, former residents of The Country Girl Folk Club in Selly Oak, when they returned there on Wednesday evening as the main guests. Their delightful singing and guitar accompaniment was matched with a constant stream of jocular patter. The group's mainly contemporary theme, including some material written by Chris Laverty was effectively supplemented by an all sorts mixture which satisfied other tastes. They proved to be very entertaining and extremely popular with their packed audience who gave them a rousing reception."

The Rising Sun, Willington Derbyshire
"Malfunction are an experienced duo and an example of the professionalism so necessary on today's folk scene. Chris and John were polished and entertaining and their material was performed with panache and style."

A quote that shall remain anonymous!
"Dear John and Chris - Just a few lines to say a big thank you for coming to do the gig at our school last week. We had so much positive feedback and one or two people said they actually preferred you to ******** and ********! Sssh - Don't tell them!."

Bromsgrove Advertiser (Recently!)
25 Years Ago March 20, 1981 - "A CAPACITY crowd packed into the Hop Pole to hear local folk music group Fairfield Folk perform with popular local group Malfunction. Malfunction's appearance was the latest in a long line of top groups to stop off at the Bromsgrove folk nights on their road to success. "

Malfunction ...are John McGowan and Chris Laverty and have been so since March 1976 (Malfunction that is!!).

Lifting our material from 60s. 70s and 80s folk and country music we also feature great original songs from stalwarts of the folk scene who we have performed with over the years - in fact anything that can be played on two guitars with an occasional bit of mandolin thrown in and that features two voices which are now dropping a bit with age might get the Malfunction treatment!

Although many of the songs are "stories" where the lyrics are important, there are plenty of opportunities to sing along to classics if you are around our age!!

We were pretty busy during the heyday of folk music in the 70s and 80s but the closure of our Prince's Corner folk club in the 1990s and work commitments meant we have only played a handful of gigs over the last 20 odd years!

However, with the number of aging pop and rock groups making comebacks nowadays, we thought we would have another go ourselves and, following a successful comeback show in November 2017 we have played short and full sets in some of our old stomping grounds. In doing so we have met many old friends again some of which go back to our very early days over 45 years ago. We hope to be meeting more in the near future. 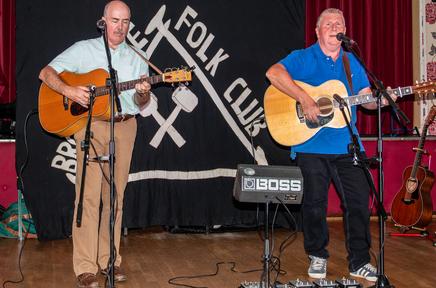 Our History
View on Mobile