John and Chris first met at Newman College of Education in Birmingham in 1971. Their first public performance (not yet as Malfunction) was December 1972 singing just two songs that we still perform to this day, albeit with different arrangements (not that the original arrangements were no good then - it's just that now we can't remember how we did them). Over the three or four years we played along with other fellow students in the thriving folk nights at Newman out of which came many other Birmingham based musicians and performers.

Chris and John were joined by bass player Dave Ashton, a fellow student from Newman and Malfunction was formed in March 1976. Our first outing was a request to do a floor spot at the legendary folk club "The Bell and Pump". Our request was granted by resident singer Terry McCann who also added - "If you are no good you won't come back!". With his good wishes ringing in our ears we did our spot - we can't have been too bad as we eventually went on to be the regular residents at the club when normal hosts Mad Jocks and Englishmen were otherwise engaged and occasionally headlined gigs there until its sad demise in the early 1990s.

Dave left us in 1979 to pursue a different musical direction and we stayed on as a duo. Although we missed the bass and the third harmony we could at least travel in one car! Nothing much changed then for the next 40 odd years! Check out the Nostalgia link for memories and stories about some of the many folk clubs and venues that we played at, were resident at or ended up in by mistake. During the glory days of local folk clubs we were out there sometimes 3 or 4 times a week and still managed to keep our teaching careers going - couldn't do that now!!.

Ah yes... The name "Malfunction". It arose on the drunken walk home from the Bell and Pump just after we had been promised a floor spot for the following week and we suddenly realised we needed a name. Being intellectuals we were trying to think of a suitable descriptive name for our act (which consisted of three songs at that time). Our three surnames of McGowan, Ashton and Laverty gave us the three initials MAL which we tried to use in various ways. MALadjusted was one possiblilty as was MALpractice and we almost settled on Broken ALM (bit too clever for my liking) but in our inebriated state we settled on MALfunction and it has stuck with us ever since. Shep Wooley said it reminded him of a "dodgy footballer" and one club billed us as Male-function by mistake. It was a very strange club and I'm not sure they were looking for a folk group!

Perhaps the most successful part of our history was running the Princes Corner Folkish Club in the King's Arms in Harborne. This weekly club ran for around 6 years from the mid 1980s and featured a guest every other week with singers' nights in between. There's more in the Nostalgia section about the club but we had some fantastic nights with some of the country's top performers. Strangely enough, many of our regulars said they enjoyed the singers' nights equally, if not more than the guest nights with artists from all over Birmingham dropping in to join our regular singers. We never knew from one night to the next who would pay us a call.

Since the closure of our Princes Corner Folk Club in the early 1990s we have played only a few gigs, most of which were with our good friends Alan and Glynn Briscow otherwise known as Dandy. Although we never actually retired (or split up!!), work commitments and the general running down of the folk club scene meant a 5 year break from performing. Thanks to our old friend Vicky at the Unicorn Folk Club we hit the stage again in June 2007 and, as it wasn't a complete disaster, did a couple more gigs. We retreated back into obscurity in 2010 and there we stayed until recently!

A new paragraph can now be added as in November 2017 we played a comeback gig in front of family and friends. This was a very successful night and we have now started limited gigging with a few appearances in local folk clubs again. The story hasn't ended just yet!! 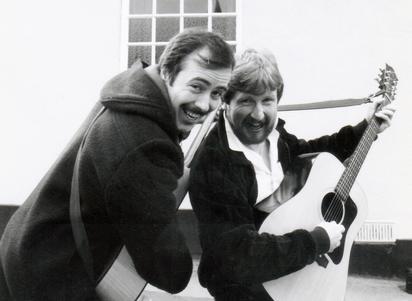