We have had some cracking nights over the years in countless folk clubs, sports clubs, schools and village halls. However, some gigs stand out for specific reasons. Here, as they say on reality shows, are our best bits.

The Belgrade Theatre Coventry supporting Lindisfarne
Perhaps the highlight of our slightly less than illustrious career was to have the pleasure of supporting Lindisfarne on one of their tour dates at The Belgrade Theatre in Coventry. We expected the bar to be full and the theatre to be empty when we took to the stage at the start of the evening but no - we were faced with a sell-out crowd all sitting expectantly in their seats! Thankfully, we also became aware quickly that quite a few of the audience knew us from the folk clubs. We did our 30 minute spot to a great crowd who were very appreciative. The biggest regret in our career was that we were too modest and declined the offer to go back on to do an encore despite the audience shouting for one and the encouragement of the Lindisfarne roadies! One of the really good things about the evening was how nice the guys in Lindisfarne were and how helpful their sound engineers were, taking the time to get our balance right and being extremely professional towards us. Thanks guys!

The Crescent Theatre - 1995, 1996, 1997 and 1998
Some of the most significant shows of ours in the 90s were the charity concerts that we hosted at the original Crescent Theatre off Broad Street in Birmingham. The four concerts from 1995 to 1998 supported a number of different charites including The Acorns Trust, The Children's Hospital, The Fireside Centre and the Romanian Orphanage Appeal. The concerts featured us, together with a special guest, which included Dandy (twice), Mad Jocks and Englishmen and No Strings with a special performance from the dancers from St. Thomas Aquinas School. Every evening was supported really well with near sell-outs of the 300+ tickets for each show and, depending on what was showing at the Crescent that week, we always had an interesting set behind us! All of the concerts were filmed (on video tape- the standard for those days!) and some of the performances can be seen on the Videos page as well as Facebook and You Tube. People have stopped asking "When is the next Crescent Concert?" now but they kept it up for many years after the last show! Unfortunately, the old Crescent Theatre was knocked down at the start of 2000 and replaced with a new theatre just down the road which we have never had the pleasure of playing at!

The NEC (Well, the foyer anyway!). The Motor Show
We had an interesting afternoon many years back at The Motor Show at the NEC. While allowing us to say that we have perfomed at the NEC, the reality is that it was in the (very large) foyer entertaining the crowds as they entered the show. It was actually a bit special as the show was broadcast live by BBC Radio Birmingham and was hosted by our old pal Malc Stent.

BBC Radio Birmingham
There were several occasions when we were broadcast by Radio Birmingham, both live and pre-recorded. Our first venture into radio was when we were invited to record a session in the studio for a long running folk programme called "Gentlefolk" hosted by Norman Wheatley (who is still performing to this day). We also recorded live sessions at the Motor Show at the NEC, at the Old Rep in Birmingham, the Solihull Folk Club, The Bulls Head in Kings Norton and one or two others.

Birmingham Town Hall
Another ambition fulfilled when we were part of a Christmas Show hosted by Malc Stent and featuring comedian Don Maclean. Having attended many concerts at the theatre in the 70s it was a fantastic feeling to stand up on that stage and play to an appreciative audience at this charity evening for Birmingham Children's Hospital.

Children In Need - Pebble Mill
One year we were invited to perform to the local crowds at the annual Children In Need event held at the Pebble Mill studios in Edgbaston. Hopes that the cameras would switch to us while we were on stage were not quite fulfilled - you could see us on TV but you would need a magnifying glass - high definition TV had not come in yet! Nevertheless it was a good gig outside the studios. The cameras were more interested in a different attraction that coincided with our performance - how many people you could fit in a mini!!

The Pub Song/Green Fields of France
While not a gig, still one of our highlights was recording our Christmas single for 1982! We released a (very limited) single of the "Harborne Pub Song" with " The Green Fields of France" on the b side. Recorded in the studio with the assistance of a bunch of friends who came to the recording to provide background effects and noises on the track, the single was on sale in many shops in Harborne and it actually out-sold the number 1 single of the time - unfortunately that happened in only in one shop, Preedy's (remember them!). What the actual Christmas No 1 of 1982 was is a topic for discussion during gigs so I won't tell you the answer here! Enough to say it wasn't a classic! The B side of our record gets used annually in assemblies in schools up and down the country on Remembrance Day!

Portsmouth, Southsea Show and The Navy Days
A regular booking for us for many years saw us visiting the south coast during August to perform at the annual Navy Days or at the Southsea Show. While down in the area we often did other gigs at local clubs or on the Navy Base. Our good friend Shep Wooley was the instigator of these gigs and organised our trip and lodgings. The Navy Days in particular were good gigs with a great bunch of people helping out on the Pussers Rum stall although the freebies did nothing for our performance! One year we were on the bill with "The Wurzells" who walked off with our guitar tuner by mistake thinking it was theirs and very kindly sent it back to us! Another regular act to perform at the shows were a duo, Jim and Dave who played keyboards and drums and were fantastic (and good guys too!). They gave me a chance to sing Walking in Memphis with them - much to Chris's amusement!!

The Pretty Bricks Folk Club, Walsall - and the birth of Clare
Chris had been awake for about 36 hours when his first child, Clare was born back in 1981. It just so happened that we had a gig at The Pretty Bricks in Walsall the same night! Chris turned up, we stood him in the corner to prop him up and, like the true pro that he is, he got through the gig on a combination of adrenaline and alcohol. On the way home, a local radio station played him a dedication with the Eagles song "New kid in town!" We managed to avoid gigs when Chris's other two children, John and Anna were born!

The Good Gigs
We have played in many excellent folk clubs and venues in and around the midlands and one or two further away. The ones that come to mind in no particular order are The Black Horse in West Kirby - Liverpool with a band called The Hooters, The Coffee House - Wavertree, Liverpool with Jackie and Bridie, Birkenhead Cricket Club, Grimstocks Folk Club, The Junction - Harborne, The Bear - Bearwood, The Plough - Eathorpe, The Cherry Trees Motel - Alcester, Pelsall Community Centre, Springfield Tennis Club - Handsworth, the Hop Pole and wherever Hopwood ran their club, Cannon Hill Arts Centre, various Rugby Clubs (some good and some ...well, nuff said!!), The Europa Lodge - West Brom, Wheaton Aston out near Telford, Webheath - Reddich, various locations in Brewood - Staffs, various Cricket Clubs and Schools, Pretty Bricks - Walsall, the Hare and Hounds - Kings Heath, Fighting Cocks - Wolverhampton, the Rock - Wolverhampton, the Lock - Stourbridge, Bedworth Folk Festival at the Civic Hall, the Woodcolliers in Bewdley, Furnace End Folk Festival, The Hibernian - Selly Park, The Rising Sun in Willington - Derbyshire and, well many many more!

The not-so good bits!!
There were inevitably some dodgy gigs over the year mainly due to agents who just wanted their commission and didn't pay much attention to what we were about! Without going into details the forgettable ones were...most beer festivals (you can't clap with a beer in both hands), an Irish club in Lichfield, a pub in Evesham where we played in front of the dart board and they continued their game, playing to ourselves in a club in Willenhall (although that wasn't unusual). Then we had some of our gear nicked in Plymouth out of my car, having my car stolen from The Princes Corner Folk club one night (never saw it again). We also disliked playing in clubs where they have a sound engineer who thinks they knew better than us what we should sound like - one of the reasons we invested in our own P.A. On one occasion we played for 40 minutes without troubling the audience in the slightest only to get a huge round of applause after the final number and shouts of more..more! It was only after the third encore that we were told that as long as we continued to play the bar stayed open! 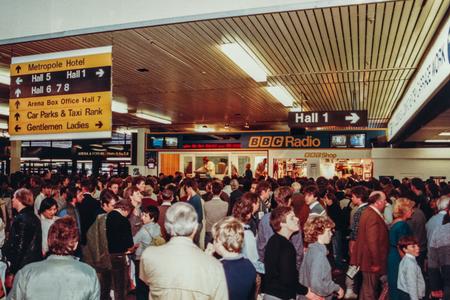