Over the years we had the pleasure of playing at some of the best venues for folk music in and around the midlands. Here are recollections of some of these clubs.

The Bell and Pump Folk Club - Edgbaston, Birmingham
Held every Friday at St Philips Old Boys Club in Waterworks Road from 1973 to the early 1990s, The Bell and Pump Folk Club was probably the best ever folk club!! Run by the late Derek Grinell and his wife Jackie, it featured the top artists of the day in a room packed with atmosphere and regular punters! The audience was often queueing down the road from 7.00pm hoping to get a seat at the best tables for the 8.30 kick off! The guest list was a who's who of the biggest names on the circuit including some of the more difficult to see artists from the States.

In the early days Barbara Dickson performed there as did many artists who went on to be big names in the music scene. The Ian Campbell Folk group were early regulars. Jasper Carott was a familiar face and Julie Felix performed there. I once had the pleasure of seeing Eric Bogle there on one of his rare visits to the UK.  The venue was also used for a regular Saturday Night Jazz Club which featured many of the top Jazz artists including Lonnie Donegan and the Chris Barber Jazz Group. But, like all clubs, the success depends largely on the resident artists. In the early days it was a singer called Terry McCann who had just won TV's New Faces programme. It was Terry who gave us our first break at the club!

However, the main driving force behind the club was the fantastic Mad Jocks and Englishmen. Over the years we have spent many an enjoyable evening with George, Andy and Nick both on and off the stage and never tired of hearing them play. Have a look at the Folk Artists section for more on Mad Jocks.

The Late Night Folk Club - Birmingham Rep
The Late Night Folk Club was run by folk stalwart John Mitchell and was remarkable club for a couple of reasons. Firstly, the venue was the studio theatre at the Birmingham Rep with its great acoustics and posh surroundings! Some nights, when a very popular act was on and the studio was too small for the crowd, they moved into the main theatre! We had one memorable night there, doing a floor spot shortly after becoming a duo. We were on with a Persian singer called Shusha who turned out to be very popular and drew an audience too big for the studio...we found ourselves performing for the first time as a duo on the main stage of the Birmingham Rep!!

The other reason the club was special was that it didn't start till 11.00pm (hence its name). This often meant that other acts who had been performing around the city on a Friday night then found their way to the Rep for another session! It was a meeting place for the very best of folk talent who often did a little spot unnanounced! The club featured some of the best artists from both the UK and world wide and also was the host for the Brum Folk Festival of 1976. A commemorative limited edition album of that event was released of which I still have a copy!!


Other Venues
We were fortunate to have played at some of the best venues around the Midlands. Our Highlights are in more detail in another section but other notable venues that we played included The Red Lion, Kings Heath, The Old Rep, Birmingham, The Belgrade Theatre, Coventry, The NEC!! (well, the foyer of the NEC anyway), The Crescent Theatre, Birmingham Town Hall, Solihull Civic Hall, Coleshill Town Hall, Birmingham Irish Centre, Pebble Mill Studios in Edgbaston and The Boggery, Solihull.

While not venturing that far out of the Midlands, we did make a few trips to Liverpool to play at The Coffee House in Wavertree with Jackie and Bridie and we visited The Black Horse in West Kirby on a few occassions to play at a club run by a great duo called The Hooters.

Folk Clubs of the Midlands 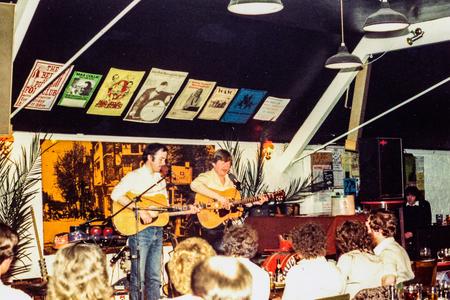