Our friends from the folk scene

Over the years we have had the pleasure of meeting and working with many fantastic performers some of which have become good friends. Others are no longer playing on the circuit, more's the pity and sadly, some are no longer with us. Here's a few recollections.

Mad Jocks and Englishmen
On the folk circuit for easily as long as us, George, Andy and Nick became good friends of ours over the years and describe themselves as "three grown men who should know better". A fantastic act, great musicians and the capability of reducing an audience to tears (one way or another) Mad Jocks are still going strong and you can find out more about them on their own web site. We have had many a great night with the Jocks who have been our special guests at most of our clubs as well as the concerts at The Crescent. In the old days we met up regularly at The Bell and Pump and I even had the pleasure of standing in on guitar when either Andy or George were unable to make a gig. We are allegedly responsible for one of their songs following a memorable curry at the infamous "Curry King" in Selly Oak after a gig together!! Check out The Vindaloo Shuffle!

Dandy
One of the funniest acts you will ever see and I should know - I've seen them enough, Alan and Glynn are two great friends of ours who have performed as our special guests many a time. We also went out as a "package" for many years opening the shows for them all over the midlands. Even thought I know the stories by heart I still laugh at them! Playing regularly all over the midlands and wider, you can find out more about them from www.dandycomedy.co.uk . We recommend a trip to see them if you have never had the pleasure before!!

Shep Woolley
Fantastic comedian and singer from down Portsmouth way who has been kind enough to book us for The Navy Days and for the Southsea Show as well as several other gigs down on the south coast. Shep is a great entertainer and we always enjoyed meeting up with him for a chat, a curry or even a gig or two. Have a look at the images from those days on the photos pages. Shep is still going strong and you can find out more from his own web site www.shepwooley.co.uk.

Allan Taylor
One of my personal favourites, Allan played several times at the Princes Corner and we also had the pleasure of performing with him on many local shows. Allan just oozes class with a fabulous voice and guitar style - he's a very nice bloke as well even if we suffered a bit of abuse from him on stage at our own club - all in good fun! We have covered a couple of his songs over the years and once he borrowed my guitar at the club when he broke a string on his own guitar - the only time it has ever been played properly. Allan has a web site worth visiting.

Jake Thackray
Sadly missed, the late Jake Thackray was another regular visitor to the Princes Corner and to the Bell and Pump. We did many gigs with Jake - the audience would sing along with the punch lines of the songs and still laugh their socks off!! A super talent and a very nice guy to work with. Have a look at the Jake Thackray web site for more information.

Maxie and Mitch
Now here was an amazing act - Billy and Peter were already well known on the folk circuit from previous incarnations but when they teamed up as Maxie and Mitch it was to great effect. Using some hi-tech (for the time) ideas they had the audience in stitches with their act. Always a great pleasure to work with, not just because there were two very nice blokes but because they always took the time to help us sort a good sound out through their P.A. Billy Mitchell went on to front Lindisfarne and he is still touring with various projects. Check out his web site.  He's a super talented musician.

Mike Elliott
Sadly, Mike passed away on 23rd December 2014. Although we hadn't seen Mike for many a year, he was a regular club performer back in the late 70s and early 80s. A friend of mine remembers a gig that I took him too because he said he was in pain for 2 weeks afterwards with laughing so much! Mike was kind enough to write a little blurb for one of our very early publicity leaflets. Another great bloke to know and to work with, Mike went on to be a star of TV and Films with a major role in Billy Elliott (no relation!!). He will be sadly missed.

Cosmotheka
One of the more unusual acts on the folk circuit but hugely popular, Dave and Al Sealey sang music hall songs with the two voices and one guitar. Fantastic to work with and to listen to, they had the ability to engage an audience withing seconds of being on stage. They did many TV and radio broadcasts focusing on the Music Hall genre. Sadly, Al passed away a few years back and Cosmotheka were much missed on the folk circuit. The good news is Dave is still playing and has started touring with his son under the Cosmotheka name again. You can read more about Cosmotheka by checking out their web site.

Always fun to work with, Vin had an amazing style, was an excellent guitar player and superb whistle player and sang songs where the words were hard hitting often tackling the important issues of the time. He was perhaps known for the fact that his hilarious introductions to songs could last at least three times longer than the song itself. There are many clips on the Internet of Vin singing and playing that are worth searching for. Sadly Vin died only a few months ago robbing the world of an amazing talent.

Malcolm Stent
A good friend and supporter of Malfunction, Malc often played at the club for us and we supported him around various venues over the years. Malc used to host radio shows on BBC Radio Birmingham and was kind enough to invite us on several occassions to perform on either live shows or to record performances for broadcast later. He also had us on his prestigious Christmas Show at the Town Hall in Birmingham. The track on our songs page  W.O.L.D. was recorded for Radio Brum at the Old Rep as part of one of Malc's shows. He is a great entertainer and is a keen promoter of his home town of Birmingham. He recently starred in the Christmas Pantomine at Solihull Theatre. 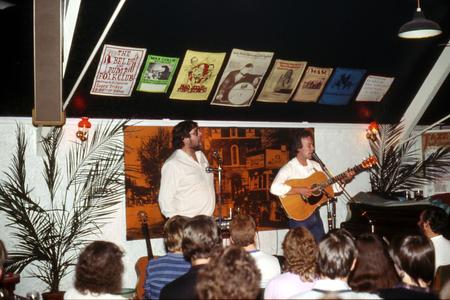